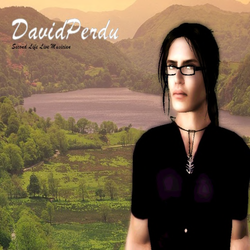 Hailing from North Wales, David Perdu (RL- David Burton)
is an accomplished songwriter and instrumentalist who has composed many thought-provoking and foot tapping songs. He has performed live both solo and with his band up and down the country for over ten years supporting fine artists such as Eric Roche and also playing backup guitar for numerous talented singer songwriters including a stint with Duffy. Over this time he has honed a unique fusion of jazz, rock and folk known as fraz.  His virtuoso guitar skills leave audiences open-mouthed as he performs his own compositions whilst also playing tribute to the work of acoustic guitar heroes such as John Renbourn, Bert Jansch and Pierre Bensusan.

David is often joined on stage by the talented Esme-Rose Melody (RL - Cath Bryan), also a member of his band The Invisible Wires, adding both saxophone and vocals to the mix.  Esme began singing at an early age with local bands and choirs in her hometown of Torquay.  Frequenting a local blues bar, Esme took her lead from the experienced musicians she found there and soon began performing herself.  During this time she was introduced to the music of Janis Joplin, Joni Mitchell and Carol King which later was to inform her own bluesy style.

Expect soaring harmonies, fearsome fretwork and a great mixture of originals, classics and modern material, all in their own unique style!